Taking steps to make our towns and cities more walkable

What is the one thing the residents of virtually every UK town and city have in common? Chances are most urban-dwellers will say their hometown is simply too congested and the traffic makes getting anywhere difficult and frustrating.

But it is not just about inconveniencing our lives. As our urban areas have become increasingly congested, they have also become heavily polluted. So, it is obvious that there is an urgent need to reduce our vehicle use overall to make the air we breathe healthier and – equally important – to help cut CO2 emissions and counter the effects of climate change.

Hence the emergence of the concept of ‘walkability’. This term refers to the ability to safely walk to amenities within a reasonable distance, usually defined as a walk of 30 minutes or less. This would typically mean an area within 800 metres of our starting point or a distance of half a mile, given an average speed of three miles per hour.

Walkability is by no means new. It is actually a planning concept developed in the 1960s that seeks to encourage mixed-use, high-density neighbourhoods where essential services and amenities can be accessed on foot.

Walkability challenges the convention that streets should focus on being merely transportation corridors designed for maximum vehicle throughput. Instead, a walkable community is one where complete, livable spaces exist to serve a variety of uses, users, and transportation modes – all reducing the need for car travel.

What makes a place more walkable?

Making an area more walkable requires much more than simply taking cars off the road. It is about creating a neighbourhood with a centre, high population density, mixed-income and mixed-use, parks and public space, pedestrian design, schools and workplaces within walking distance, and complete streets that encourage multimodal transportation.

Consider the way that many of our towns and cities have evolved and it is apparent that ‘walkability’ has not previously taken priority. Car transport and accessibility has often prioritised roads over such things as footpaths and cycle paths, and roads have in many cases been extended and widened to cope with rising traffic levels.

Retail parks and critical employment areas have often been developed in locations on the outskirts of towns and cities with the expectation that most people will drive to work and go shopping in the car. Whilst these sites will often be accessible by public transport, many will certainly not be easy to walk to.

Safety and security concerns have sometimes put barriers in place when attempting to walk from A to B. For example, if the route on foot means using a subway under a busy road that we know is a magnet for anti-social behaviour, we will probably actively avoid it. And that might deter us from walking altogether!

So making a neighbourhood walkable requires a joined-up approach that very much challenges the priorities of recent decades. And while this isn’t going to happen overnight, the positive news is that many towns and cities are already evolving to be more walkable with extremely positive changes taking place. 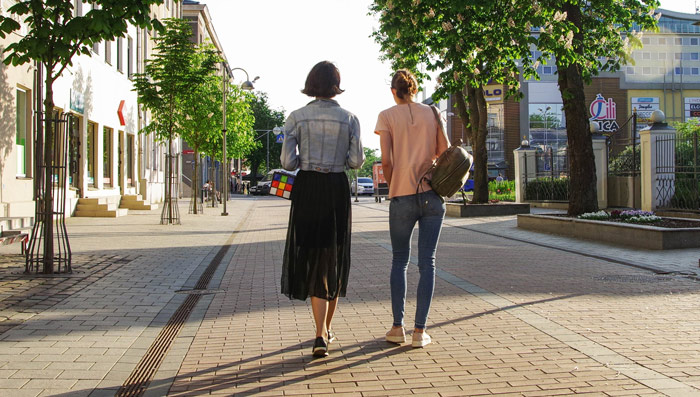 What are the benefits of walkability?

A walkable neighbourhood has a whole host of benefits:

By reducing car use, we cut air pollution and CO2 emissions. This could make a significant improvement to the lives of local people and the world as a whole. Improving the attractiveness and purpose of our neighbourhood, such as enhancing parks and green spaces, footpaths, cycle routes and pedestrianised streets, provides an opportunity to plant more trees and create habitats that encourage bio-diversity. Planters can be integrated with seating alongside footpaths, for example.

We’ve mentioned improvements in air quality – essential for those with conditions such as asthma and COPD. But other public health improvements come with activity levels – the more we walk, run and cycle, the more exercise we get, which is crucial for tackling obesity and other health issues. Research also indicates being outdoors and exposed to nature in whatever for that takes benefits our well-being overall.

A walkability strategy will identify those locations and features of the neighbourhood that could be a risk to public safety, such as a poorly lit, enclosed footpath or underpass or where a pedestrian route needs to cut across a busy dual carriageway. Designing new routes with proper lighting, and visibility as well as eliminating hazards like a busy roads will therefore make communities safer and potentially reduce crime.

The economic benefits of a walkable area could be powerful too. Local facilities are used more, such as neighbourhood coffee shops and convenience stores, and as walking encourages greater multi-modal transport, we are more likely to spend money on travelling by bus, train or tram, rather than filling up the fuel tank of our car. This helps support local businesses and their supply chain which helps to protect and create jobs and keep wealth-generation in the community.

When restrictions on our daily lives were implemented during the Covid pandemic, many people took the opportunity to reconnect with their local area. Simple things like walking to the local greengrocer rather than driving to a supermarket became the norm, which meant we got to know our neighbours better and the community was stronger than ever. A walkable neighbourhood would give these kinds of benefits all the time.

Walkability scoring - how does this work and how can we compare towns and cities?

As a way to keep track of how walkable our towns and cities are, and to give us a necessary benchmark for improvements, walkability can be quantified and measured according to several assessment metrics.

Walk Score is perhaps the best known. This evaluates walkability based on proximity to key destinations, population density, and metrics including block length and intersection density, but does not take into account street conditions or other factors that could make even a short trip less walkable or unsafe.

Under this system, neighbourhoods are rated on a scale from 0 to 100. Those scoring 90-100 are regarded as a "walker's paradise" where daily errands can be done without a car. But at the other end of the scale, those areas with a score of 0-24 would definitely be described as car-dependent.

There are several other indexes which offer something slightly different to Walk Score, These include elements such as the bike and pedestrian infrastructure, user perception of safety, and connectivity to transit and other amenities.

But the walkability of a town or city can also be determined by asking the people who live there. This is exactly what the Living Streets charity did recently when it commissioned a survey with Opinion Matters. They spoke with 2,200 people from the 10 biggest cities (by population) in Great Britain along with the Welsh capital Cardiff.

Their survey revealed that Edinburgh is the country’s most walkable city, followed by Sheffield and London. The rest of the top ten was made up – in order – by Liverpool, Glasgow, Bristol, Manchester, Leeds, Birmingham and Bradford.

This survey actually gives planners a useful reference point to guide future walkability strategy. What can we learn from Edinburgh that could help any other UK town or city? So in combination with the established tools and indexes, there is a good mix of evidence to make the positive changes needed to put walkability at the heart of many more neighbourhoods.